Is having anti-virus software necessary?

With cybercrime and malware infections at an all-time high, having anti-virus has become a necessity. It’s one of the most important programs to have on a computer because it’s often the one thing that stands in between malware and your data. But because there are hundreds of anti-virus programs, it can be difficult to choose the right one for you. 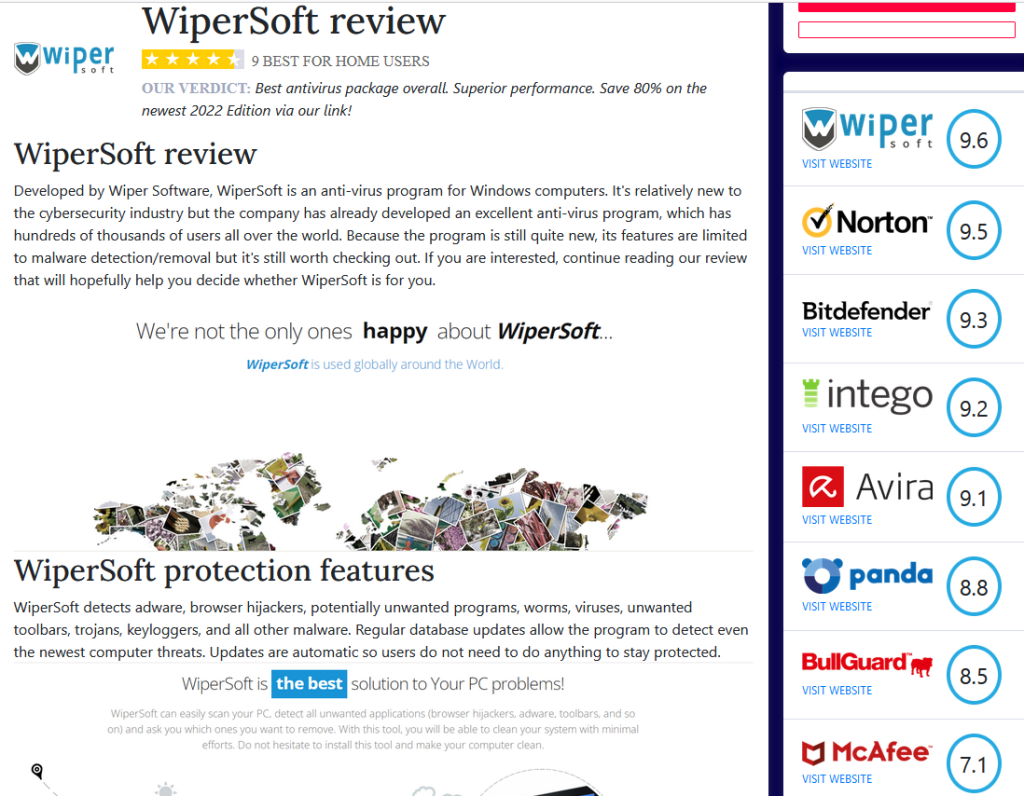 Anti-virus programs come with a wide range of features, vary in price, design, etc. But their most important feature is malware detection/removal. For any security program, it’s essential that it is able to detect and deal with infections like spyware, unwanted programs, rootkits, trojans, worms, viruses, ransomware, and other infections. Other features are only extra, though they do provide security improvements that are often necessary.

If you’re shopping around for a new anti-virus program, below are some of the best antivirus software for Windows to use in 2022.

Developed by Wiper Software, WiperSoft is an anti-virus program for Windows computers. It’s one of the more recent players in the game but in a few short years, it has become a reliable tool that can help effectively deal with a variety of malicious software issues and protect a computer. 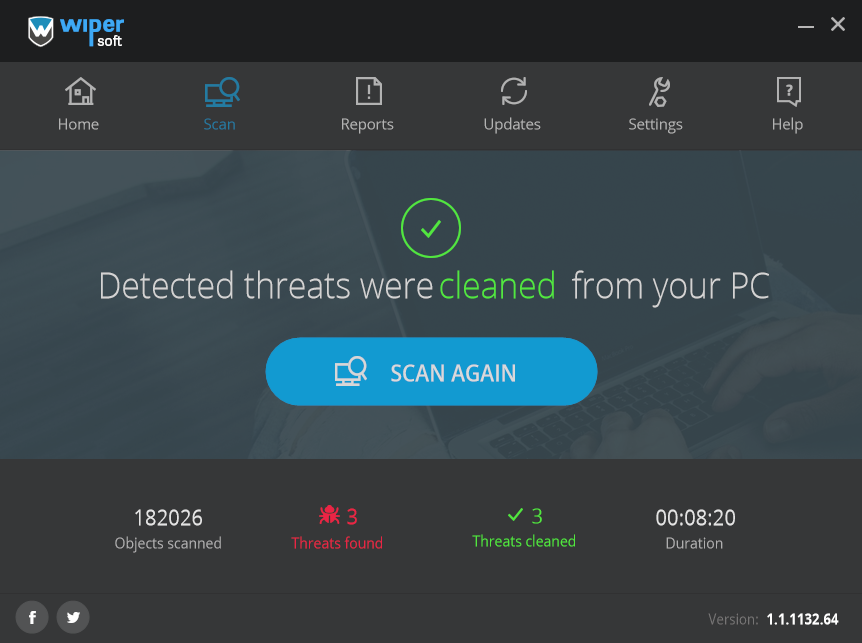 Because WiperSoft is an anti-virus program, its focus is on identifying and removing malicious infections from computers. It detects a wide range of malware, from minor infections to all major ones. One thing to note about WiperSoft is that it’s very effective against infections like adware, browser hijackers, and potentially unwanted programs (PUPs). These infections are not considered to be particularly serious by big anti-virus vendors so it’s not uncommon for them to not detect them. However, these infections are highly annoying to deal with and can even eventually result in something much more serious. WiperSoft has an extensive database of these infections so it will detect even the most recent hijackers or adware threats. However, while it’s highly effective against commonly overlooked issues, it also deals with infections like worms, trojans, viruses, rootkits, and other malware.

If for one reason or another, WiperSoft is unable to remove an infection, users have the option of contacting the help desk. Technicians would review the issue, come up with a custom fix, and deliver it to the program so it can automatically remove the infection. This is certainly a handy feature and it’s available at no extra price.

Considering that it’s relatively new software, it does not yet have additional features. However, that will likely change in the near future.

The program’s interface is a very important aspect to consider when picking an anti-virus program. While anti-virus programs are complex, their usage should not be. Users need to be able to use such programs without difficulty because otherwise, their will either choose a different program or not use one altogether. WiperSoft is very user-friendly and easy to navigate. The design is also pleasing to the eye.

Another important thing to consider is how a program affects a computer’s performance. In the past, anti-virus programs often had a negative impact on systems, especially when performing certain tasks. However, this is no longer an issue with modern computers. So WiperSoft will have very little impact performance-wise so you should not even notice it running.

WiperSoft has a very limited free version that you can use to scan your computer. However, to use the program’s removal features, you would need to buy a subscription. Subscription length varies but WiperSoft has only one plan. For a 6-month subscription, you would need to pay $36 ($6/month). A 1-year license for 5 devices is $50 ($4.17/month), while a 2-year subscription plan for up to 5 devices is $72 ($3/month). If you’re not satisfied with the program, there is a 30-day money-back guarantee. It should also be mentioned that subscriptions renew automatically. If you do not want to be charged again, you need to manually cancel the subscription. 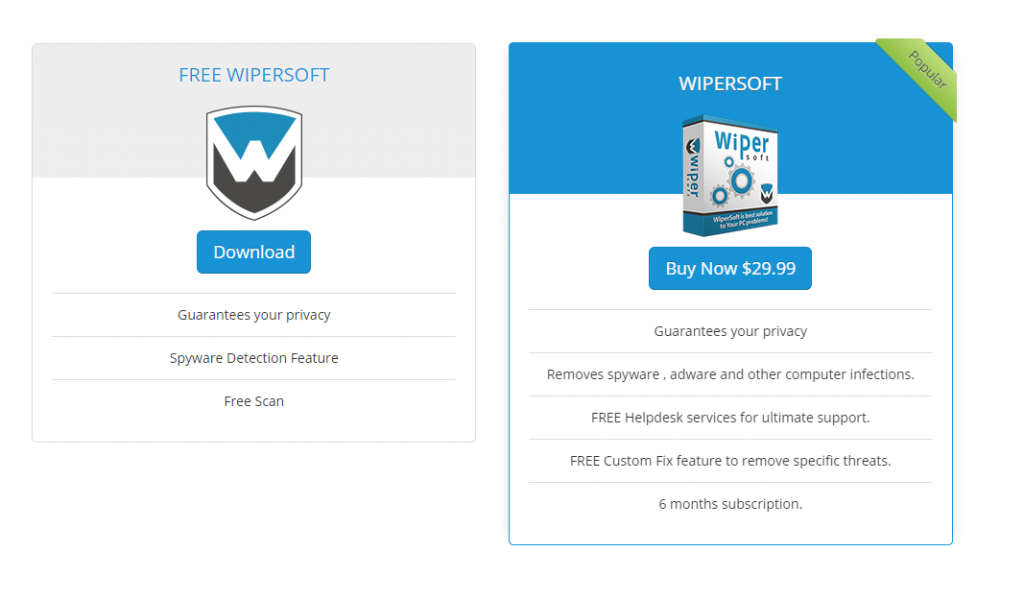 ESET is one of the most recognized names in the industry. Developed by a Slovak company by the same name, ESET is a veteran anti-virus program that has been protecting users for several decades now.

ESET is a computer security program that not only protects computers from malicious infections but also offers other features. ESET’s significant malware database allows the program to detect a wide range of infections, including adware, spyware, potentially unwanted programs, viruses, trojans, keyloggers, rootkits, malware, etc. One of ESET’s most essential features is protection against ransomware and phishing. ESET also has a password manager, data encryption, privacy and banking encryption, and network/smart device protection. Though these features are part of ESET’s more expensive plans.

Like most modern anti-virus programs, ESET is barely noticeable whether it’s actively scanning, removing a threat, or simply monitoring for incoming infections. The design is very modern, and the interface is quite easy to use. The whole program is sectioned to make it easier to navigate, so even users with little technical knowledge should have no issues using it.

If you’re on a limited budget, you can use ESET’s free version, though the main features are only available to subscribed users. Generally, ESET is one of the cheaper programs but the price does depend on what features you want. If you only need malware detection/removal and protection against phishing, the ESET NOD32 Antivirus is likely the best option for you. It costs $39.99/year and is available for both Windows and macOS devices. For more features, the Advanced Protection ESET Internet Security subscription plan may be a good option. For $49.99/year, you get protection against malware and phishing, as well as privacy/banking/network/smart devices protection. It also works on Android devices, in addition to Windows and macOS. To get a password manager, sensitive data encryption, and protection against new threats, in addition to all of the already mentioned features, you would need to purchase the Ultimate Protection ESET Smart Security Premium subscription for $59.99/year. It should also be mentioned that subscriptions renew automatically. If you do not want to be charged again, you need to manually cancel the subscription. 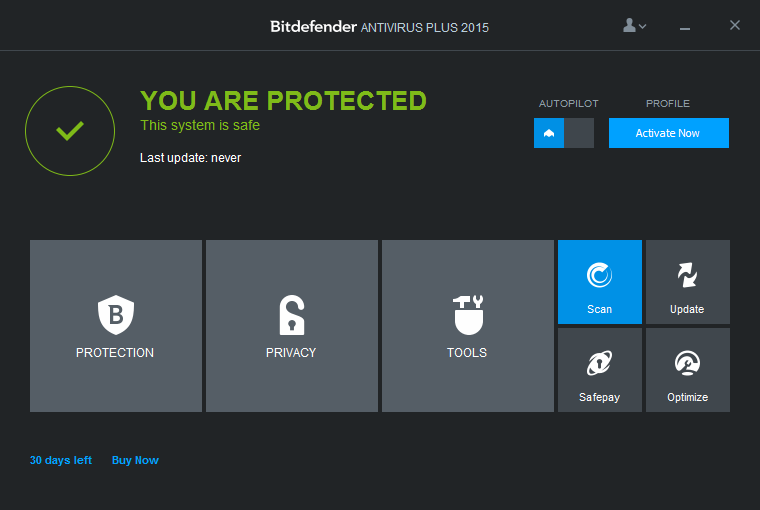 BitDefender is primarily an anti-virus program, and its huge malware database allows it to detect all kinds of malicious infections. That includes adware, hijackers, spyware, viruses, trojans, keyloggers, rootkits, ransomware, etc. If basic protection is not enough, BitDefender has extra features, though you would need to buy the more expensive plans. The features include protection against phishing, a Privacy Firewall, and a system optimizer.

What we like about BitDefender is that despite having quite a lot of additional features, the interface isn’t cluttered. Everything is clearly sectioned and the program itself is easy to navigate. The program’s design is also pleasing to the eye. And when it comes to performance, BitDefender is barely noticeable. None of its performed actions will negatively impact your computer’s performance, whether it’s scanning or merely monitoring.

BitDefender’s subscription price depends on what kind of features you need. We should also mention that there are big discounts for the first year so the price will be higher after that. If you don’t need any additional features, you can buy the Bitdefender Antivirus Plus plan for $19.98/the first year, then $39.99/year. It allows program usage on up to three Windows devices, as well as includes malware detection/removal, and multi-layer protection against ransomware. If you need more protection, the Bitdefender Internet Security plan may be a good option. For the first year, the price is $29.99, then goes up to $59.99/year. With this plan, BitDefender can be used on up to three Windows devices. The subscription includes the above-mentioned features, the Privacy Firewall, and parental controls. If you need to protect up to five Windows and macOS devices, the Bitdefender Total Security is for you. For $38.89 the first year, then $89.99/year, you get the above-mentioned features and a system optimizer. Lastly, the Premium Security plan for $59.99/the first year, then $139.99/year, offers the mentioned features, an unlimited VPN, and priority support. It should also be mentioned that subscriptions renew automatically. If you do not want to be charged again, you need to manually cancel the subscription.

And last on this list of the best antivirus for Windows 10 in 2022 is Norton anti-virus. Previously known as Symantec Corporation, American company NortonLifeLock Inc is the developer behind the Norton anti-virus program. Norton is a security program that not only protects from malicious infections but also offers additional features. 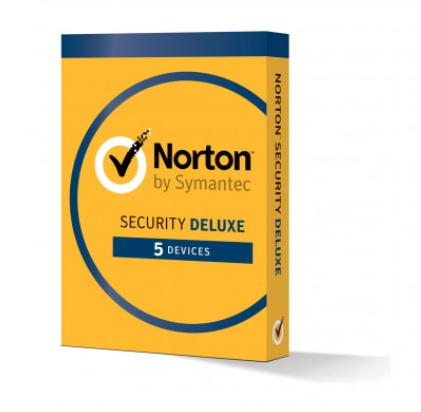 Norton anti-virus not only has great protection against malware but also offers additional features. Due to its extensive malware database, Norton will be able to detect and remove spyware, viruses, trojans, keyloggers, ransomware, and other malware. Norton is one of the more expensive programs out there but even the cheapest plan comes with great extra features like a password manager and cloud storage.

Design-wise, Norton is a pretty standard program. The design is clean, and the program itself is easy to use. All features are sectioned clearly so even users with little technical knowledge should have no issue navigating it. And when it comes to performance and impact on a system, Norton is very silent. It works to protect your computer while not disrupting your regular computer usage.

Norton has a variety of subscription plans, and you are certain to find what you need. If you only need basic protection against malware, 2GB of cloud storage, and a password manager, you can get the Norton Antivirus Plus for $14.99 for the first year, then $59.99/year. The Norton 360 Deluxe subscription is $34.99/the first year, then $104.99/year. It offers all anti-virus features, 50GB of cloud storage, a VPN, parental controls, a password manager, and more

If you want more features, try the Norton 360 with LifeLock Select. For $99.48/the first year, then $149.99/year you get all of the above-mentioned features, usage on up to 5 devices, 100GB of cloud storage, dark web monitoring, LifeLock Identity Alert System, credit monitoring, SSN & Credit alerts, and more. And for $299.88 for the first year, then $349.99/year, you can get the Norton 360 with LifeLock Ultimate Plus subscription that includes all of the mentioned features, usage on an unlimited number of devices, 500GB of cloud storage, and more. It should also be mentioned that subscriptions renew automatically. If you do not want to be charged again, you need to manually cancel the subscription.

OfferDownload Removal Toolto scan for AntivirusIf you have been infected with Antivirus, you need to get rid of it as soon as possible. For faster removal, use anti-malware software.
More information about WiperSoft and Uninstall Instructions. Please review WiperSoft EULA and Privacy Policy.