Fake Paypal Account Checker Virus refers to a fake program that claims to check whether PayPal accounts are valid. Instead, when installed it infects the computer with data stealer trojan ClipBanker. The program that installs this trojan is likely advertised on highly questionable websites as a tool to check whether PayPal accounts are legitimate. There are countless websites and forums that advertise dangerous programs, which is why users are encouraged to only use legitimate sources when downloading something. Otherwise, users could end up with serious malware, including ransomware that encrypts files. 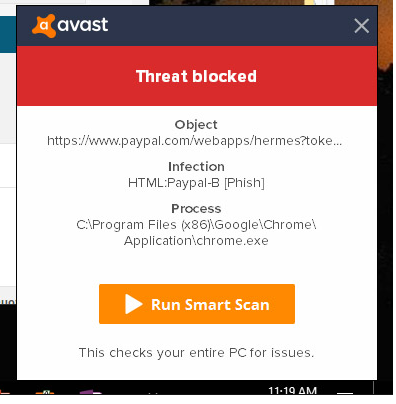 If you download and launch the fake Fake Paypal Account Checker, the program would generate a fake list of PayPal accounts and install ClipBanker in the background. If anti-virus software is not installed on the computer, users will not necessarily notice its presence as it shows no obvious signs of being present in order to avoid detection. Once it’s inside a computer, it will focus on stealing various sensitive data, including browser history, cookies, account information, data from social media and messaging services, etc.

If there is anti-virus software installed, it will immediately remove Fake Paypal Account Checker Virus from your computer. However, if you don’t have such a program installed, it may take a while to notice its presence.

How do such malware threats infect computers?

ClipBanker has been noticed to come with a fake Paypal account checker. As we said, it’s very likely that it’s advertised on highly questionable websites and forums. Users are essentially tricked into downloading it as it’s advertised as a program that will check whether a PayPal account is valid. Such programs won’t be allowed on legitimate download sites that are regulated properly so users are recommended to stick to them when downloading software. Otherwise, their computers could get infected with all kinds of malware, from simple infections like adware to serious data-encrypting ransomware.

The ClipBanker malware doesn’t only spread via fake programs, it can also come in malspam emails, in software cracks, etc. Plenty of users have bad browsing habits, which include opening malicious email attachments and downloading software cracks, and that’s how they end up infecting their computers.

Spam emails are one of the most common ways users pick up malware. But the emails are fairly obvious, if users pay attention. They are sent from random-looking email addresses and have a lot of grammar and spelling mistakes. They also often use threatening language to force users into opening the email attachments. While in most cases malspam is pretty obvious, some emails may be more sophisticated. To make sure users don’t open any malicious attachments, they should always first scan them with anti-virus software or a service like VirusTotal.

Users should also not download software cracks, as they often contain malware. Downloading software cracks is also essentially stealing programs. These are the two reasons why users should never pirate software.

When users download and launch the Fake Paypal Account Checker, it will generate a fake list of PayPal accounts and install a data stealing ClipBanker trojan in the background. It will do so silently, and the trojan itself is pretty stealthy. ClipBanker focuses on stealing sensitive information from the infected computer, and that includes browser history and cookies, bank account information (usernames, email addresses and passwords), payment card data, all kinds of personal information, etc.

Because the malware steals data, it stays in the background to avoid detection. It would be immediately detected by anti-malware software but if users don’t have such a program installed, ClipBanker could go unnoticed for a while. Computers infected with malware can show some signs but it’s not always very obvious. Malware symptoms include a unexpectedly sluggish computer, programs not launching or crashing randomly, and strange processes in Task Manager.

Scan QR code and get the HRDHS ransomware removal instructions on your mobile.

The QR code is displayed on our webpage because sometimes it may be difficult to terminate such unwanted programs as HRDHS ransomware. You can scan the QR code using your mobile phone and get manual removal instructions that will help you remove HRDHS ransomware from your device.