What is Norton LifeLock email scam

Norton LifeLock email scam refers to a tech support scam that tries to trick users into calling fake tech support numbers. The email claims that users’ Norton subscriptions have been renewed and they’ve been charged, for example, $349.99. To supposedly refund this charge, the emails suggest users call the displayed phone number to be connected to Norton’s customer support. In reality, users would be connected to professional scammers who would try to trick users into paying hundreds or even thousands of dollars. This is known as a refund scam. It goes without saying that Norton has nothing to do with this scam, its name is just used by scammers. 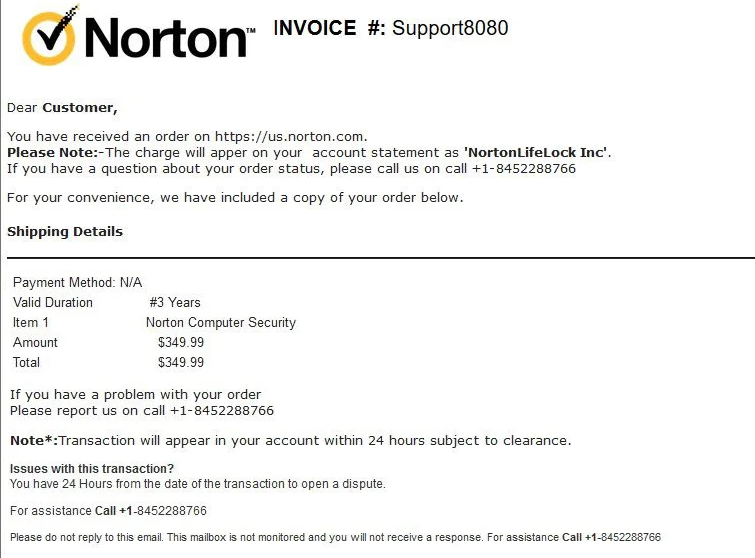 The “Norton LifeLock” email scam is just one example of how malicious actors use legitimate names like Norton to scam users. While these scams may be operated by different scammers, they all look more or less the same. This particular email reminds you that your Norton subscription has been renewed. According to one particular email that we’ve encountered, $349.99 was supposedly charged. The sum will differ depending on the scam. The first thing users who received such an email would do is check their account for the payment. But the email may claim that the transaction will not appear in their account immediately, and instead would take up to 24 hours to be processed.

The sender advises you to call Norton’s customer service phone number provided in the email if you have any questions or would want a refund. Even though the phone numbers listed in these emails may be different, dialing any of them would connect you to professional scammers posing as Norton employees. If you raise doubts that they work for Norton, scammers may claim that they’re employees of a call center outsourced by Norton.

If you were to call the number to cancel the subscription, scammers would follow a script and offer you a refund. They would request remote access to your computer because it would allow them to use deceptive tricks. Their reasons for requesting remote access to your computer will not make much sense if you know anything about computers. But their target victims are less tech-savvy users.

One type of tech support scam would involve scammers asking for remote access to scan your computer for malware. If permitted, they would pretend to scan your computer and claim to have detected malware. They would then pretend to remove it, while potentially stealing your files/information, as well as setting a password for your computer. At the end of this fake session, you would be asked to pay hundreds of dollars. If you refuse to pay, they may start threatening you and/or refuse to give you the password they’ve set.

Refund tech support scams operate in a slightly different fashion. Instead of offering tech support services, scammers claim to offer a refund. The way refund scams work is scammers pretend to transfer a significantly larger sum of money than intended and then ask users to send it back. For example, if the refunded sum is $350, they may claim to have transferred $3,500. If scammers have remote access to the computer, they would use various tricks to make it seem like users actually received the money. They may display fake pages after asking you to log in to your online bank account. For less tech-savvy users, it may actually appear like the money was sent to them.

If scammers are successful in convincing users that they’ve accidentally sent a large sum of money, they would start begging users to send the difference back. Scammers would use various psychological tactics to pressure users if they refuse to send the money. For example, they may claim that they’ll be fired and lose their only source of income if they don’t get the money back. If users fall for these tactics and agree to send the money, they would be transferring their own money because scammers didn’t actually make the transaction.

These kinds of scams frequently succeed when the victim is someone who can be considered less tech-savvy. Usually, victims are asked to make payments using wire transfers or gift cards. This guarantees that victims cannot get their money back and that the malicious actors cannot be found. This happens frequently enough that stores selling gift cards put up signs warning customers about such scams. Furthermore, store employees also sometimes receive training to spot potential victims when they’re buying gift cards. But scammers instruct victims on how to respond to specific questions they may be asked while purchasing gift cards so that no one would alert victims that they’re getting scammed.

Sadly, victims who send money to these scammers very rarely get it back. It is also challenging for law enforcement to find and prosecute scammers because they are usually based abroad. But it’s still a good idea to report scams like Norton LifeLock email scam to the authorities.

Email scams like this Norton LifeLock email are rather simple to identify. They often contain grammar/spelling mistakes, and just generally seem off. You will never see grammar or spelling mistakes in emails sent by legitimate companies because that would look very unprofessional. But for whatever reason, malicious and scam emails are full of them. That may be because scammers are often not native English speakers, or it’s a tactic used to weed out more cautious users who may question the scam later on. 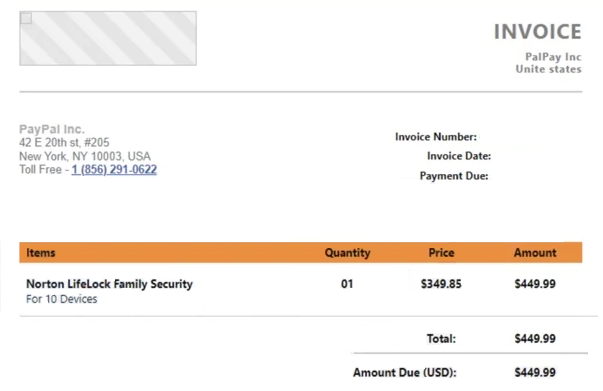 The best course of action when it comes to these kinds of emails is to just ignore them. If you do not use Norton anti-virus or any other service by this company, there is no way you would be charged because they do not have your payment card details.

You can just remove Norton LifeLock email scam from your inbox if it lands in your inbox. You can pay no attention to the contents since it’s a scam. In some cases, these emails can have files attached to them. It’s important that you never open unknown email attachments because they could contain malware. Emails may also contain links to malicious websites, which is why you should also avoid clicking on any unknown links.

Scan QR code and get the SEX3 Ransomware removal instructions on your mobile.

The QR code is displayed on our webpage because sometimes it may be difficult to terminate such unwanted programs as SEX3 Ransomware. You can scan the QR code using your mobile phone and get manual removal instructions that will help you remove SEX3 Ransomware from your device.