What is GandCrab ransomware

Discovered in early 2018, GandCrab ransomware is now one of the most widespread file-encrypting infections to affect users worldwide. It spreads primarily via spam emails and exploit kits, and is continually updated. 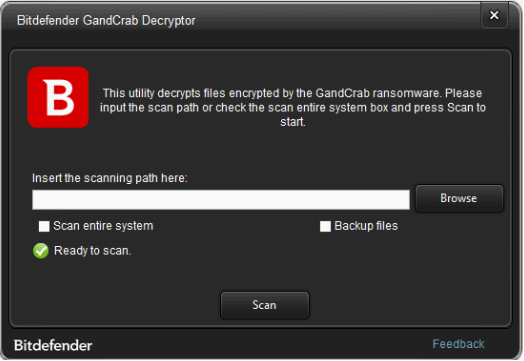 Since the first release, GandCrab developers have released at least 4 other versions, even if they do not differ that much. When victims become infected with GandCrab and their files become encrypted, they are offered to buy a decryption tool. The ransom is supposed to be paid in the cryptocurrency Dash, and the requested sum is usually somewhere between $500 and $1200 for individual users. For companies, the ransom is much higher.

When dealing ransomware, victims are never advised to pay because it does not guarantee that they will get the decryptor. After all, the crooks behind GandCrab can only offer you their word that they will help you, and trusting cyber crooks to keep their word is not wise. In many cases, instead of paying, victims are advised to backup the encrypted files and the ransom note for when/if a free decryption tool becomes available. Those free decryptors are released by cybersecurity researchers and security companies who want to help victims. For those users who found themselves dealing with GandCrab with no backup for lost files, software company Bitdefender has released a free decryptor. Bitdefender released one back in February and it helped victims of the early release to decrypt files, but GandCrab developers released new GandCrab versions since then. However, Bitdefender is there to help again.

How to use the GandCrab decryption tool

Bitdefender reports that hours after the release of the GandCrab decryption tool, there were more than 1,700 successful decryptions. The estimated amount of money that GandCrab developers lost because of the free tool is over $1 million.

For those affected by versions 2 or 3 (.CRAB file extension) , Bitdefender asks to wait a bit longer. Victims are encouraged to not pay the ransom, back up encrypted files and the ransom note, and wait for a free GandCrab decryption tool.

“If you are infected by versions 2 or 3 of the ransomware, we kindly ask you to hang on and not pay the ransom!  We’re still investigating ways to help recover the data and we will come back with an update once we have one,” Bitdefender says.

Scan QR code and get the Venomous Ransomware removal instructions on your mobile.

The QR code is displayed on our webpage because sometimes it may be difficult to terminate such unwanted programs as Venomous Ransomware. You can scan the QR code using your mobile phone and get manual removal instructions that will help you remove Venomous Ransomware from your device.

OfferDownload Removal Toolto scan for GandCrab RansomwareIf you have been infected with GandCrab Ransomware, you need to get rid of it as soon as possible. For faster removal, use anti-malware software.
More information about WiperSoft and Uninstall Instructions. Please review WiperSoft EULA and Privacy Policy.