With users concerned about their privacy now more than ever, virtual private networks (VPNs) are becoming increasingly popular. VPNs are tools that essentially encrypt your traffic, allow you to browse anonymously and spoof your location, unblock geo-blocked content, and just generally make your browsing more private. 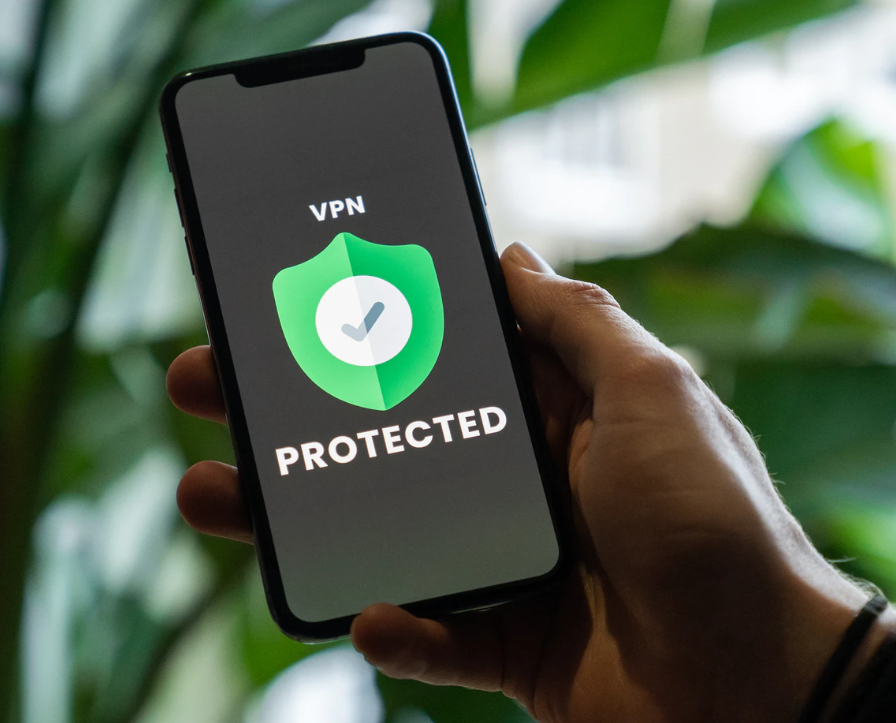 There are many VPN providers in 2023, making it difficult for users to choose one that best suits their needs. Generally, reliable VPNs are paid programs but free VPNs are also available. But when it comes to free VPNs, you need to be very careful.

The problem with free VPNs

Free VPNs are free for a reason in many cases. And that’s because they make money in other ways, mainly by selling users’ browsing data. Data collection and potential distribution is the biggest issue with free VPNs. This practice not only defeats the whole purpose of a VPN but also puts users’ privacy in serious danger. So for users for whom privacy and remaining anonymous are a priority, free VPNs are not the way to go.

When choosing a free VPN, one of the most important things to consider is whether it keeps logs of browsing activities and connection information. Even with premium VPNs, this is a difficult thing to check because as a user, you have no way of confirming whether logs are kept. But premium VPNs like NordVPN, Surfshark, CyberGhost, etc., are audited by third parties. This usually means that the companies’ no-log policies are legitimate. In many cases, free VPNs are not only not audited, but they also keep detailed logs.

Free VPNs also often struggle with unblocking geo-blocked content and streaming services. If that’s the reason why you want to use one, it’s unlikely that you’ll be able to find one that works so easily. Developing and maintaining VPNs that can bypass streaming service blocking is expensive and requires constant work, and free VPNs simply do not have the means to do this most of the time.

Generally, it’s not recommended to use free VPNs if you’re concerned about your privacy. And if you’re looking for a VPN to allow you access to geo-blocked content, you’ll also struggle to find one that works. But there are some good free VPNs that at least claim to not keep logs. There are also free trials of premium VPNs, as well as limited free versions. You should also look into premium VPNs that have discounts. In some cases, you can get a good VPN for as little as $3/month.

You should not expect to get premium quality VPNs for free. VPNs are expensive to develop and maintain, and allowing unlimited free access to users is just not feasible. But while you won’t be able to take advantage of premium features, finding VPNs for free is not impossible.

All of the VPNs in this list of free VPNs are safe to use because they do not keep logs and allow users to browse anonymously. However, they are offered by premium VPNs that offer free versions so they do limit usage in some way, whether it’s server locations or limited data allowance.

Operated by Swiss company Proton AG, ProtonVPN Free is often credited as one of the best options for those looking to use VPNs for free.

One of the best things about Proton VPN’s free version is that there is no data limit. In most cases, premium VPNs that offer free versions give users data allowances (e.g. 10GB per month), but Proton VPN allows users to use however much they want. Furthermore, it has great speeds, peaking at around 360-380Mbps.

Most importantly, Proton VPN has a no-logs policy, which means your data is not logged. This is one of the most important things to consider when choosing a VPN if you care about privacy. While you’re connected to the VPN, your browsing data will be encrypted, protecting you from prying eyes, as well as your internet service provider (ISP). And if your connection gets dropped for some reason, Proton VPN has a kill switch that will immediately block your data from leaking.

Instead of limiting data usage, Proton VPN limits simultaneous connections, as well as the number of servers (and locations) available. You will only be able to use Proton VPN on one device and connect to servers in only 3 countries (the US, the Netherlands, and Japan). There’s also no 24/7 customer support but you can reach the company via email. 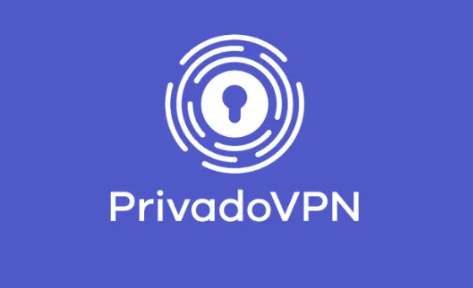 PrivadoVPN is a relatively new VPN, developed by Switzerland-based company Privado Networks AG and released in 2019.

If you use PrivadoVPN’s free version, you’ll be able to connect to servers in 12 locations (9 countries). It also has pretty impressive speeds, peaking at around 350Mbps. PrivadoVPN limits simultaneous connections to 1 and allows up to 10GB of data usage every 30 days. Interestingly enough, even if you run out of data, you’ll be able to continue browsing with the VPN but with serious speed limitations at only 1Mbps. You won’t be able to do much with that but it should be enough for some activities like checking your email.

PrivadoVPN has a no-logs policy but it does not appear to have been audited by a third party. Having an independent party verify that no data is indeed collected would greatly benefit PrivadoVPN because more cautious users would choose it.

It’s worth a mention that PrivadoVPN unblocks Netflix, Disney+, Amazon Prime Video, and BBC iPlayer. That’s quite rare for free VPNs. But with only 10GB of data a month, you won’t be able to enjoy too much of the unblocked content.

Windscribe was initially released in 2016 by Canada-based company Windscribe Limited.

Windscribe VPN has a no-logs policy so your browsing data will not be logged. Your connection will also be encrypted, shielding it from prying eyes. However, the free Windscribe VPN version allows connection to a limited number of servers, and only in 10 locations. Depending on why you need the VPN, that’s not a lot. But it’s worth mentioning that Windscribe VPN does not limit simultaneous connections, so you’ll at least be able to use it on as many devices as you want. You also only get 10GB of data per month.

Speedwise, Windscribe’s free VPN version is fairly standard, with average speeds of 240Mbps. That’s a great speed for most online activities. The VPN’s interface can be a bit confusing if you want to make changes to its settings but operating it isn’t particularly difficult. Customer support is a bit disappointing because there is no 24/7 support for either version. You’d have to send an email to customer support in order to get assistance.

Windscribe VPN does unlock streaming services like Netflix, Amazon Prime Video, and Disney+, but you won’t be able to stream all that much due to the 10GB/per month data allowance.

It has a no-logs policy but it appears that only the iOS app has been audited by a third party. But considering that Atlas VPN is owned by a reliable cybersecurity company, there’s likely no need to worry about data collection. It encrypts data, protecting it from prying eyes, and has a kill switch to prevent data leakage in case the connection to the VPN is dropped. 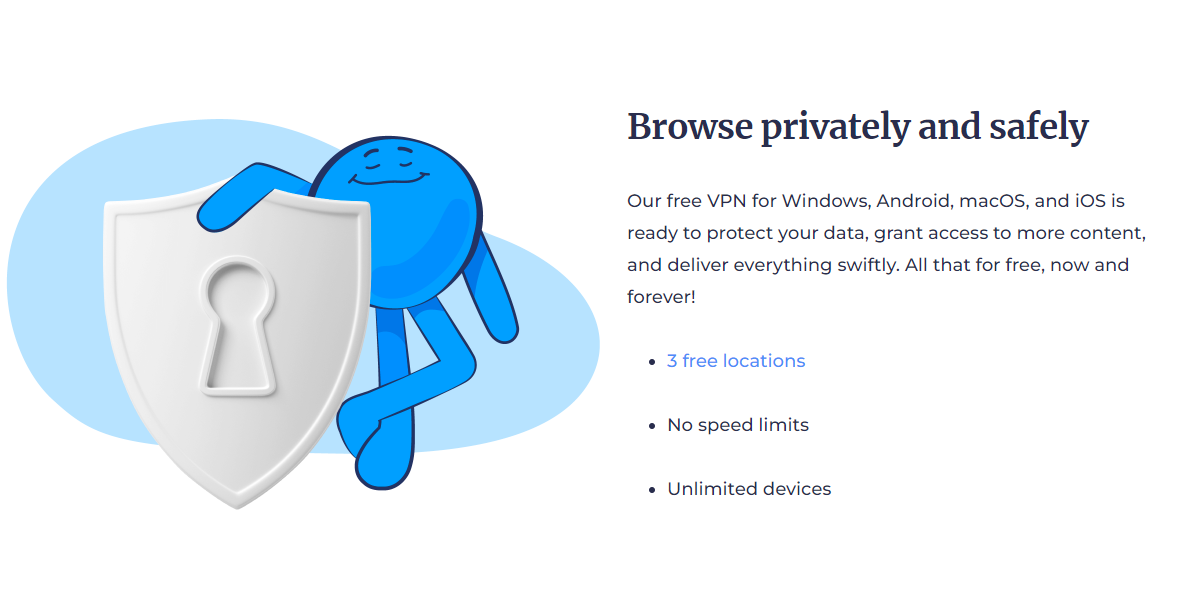 Atlas VPN’s free version gives users 10GB of data per month. That’s a pretty standard data limit, and while you won’t be able to stream movies and TV series, it’s an optimal amount for regular browsing. It also only allows 2 simultaneous connections, which isn’t a lot but considering it’s offered for free, it’s pretty good. It allows users to connect to servers in 3 locations, which again, isn’t a lot but should be enough for users to get by. 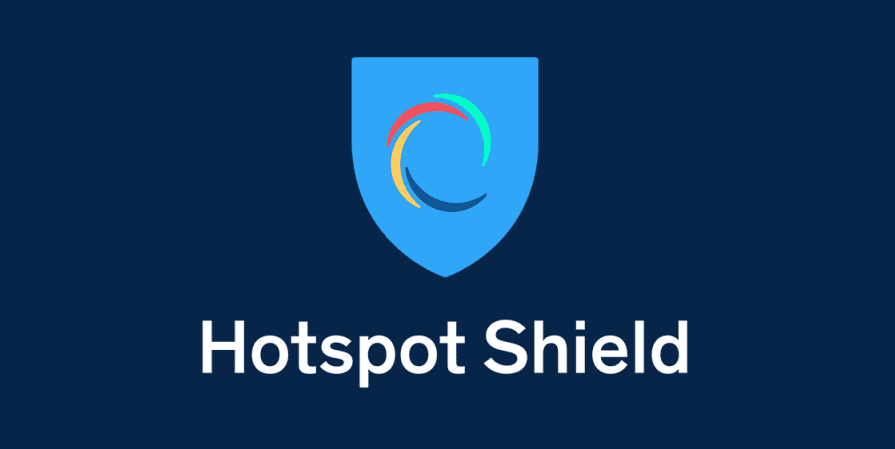 Hotspot Shield is a VPN developed by a California-based internet and privacy company AnchorFree.

One particularly good thing about Hotspot Shield is that it does not limit data usage. You will be able to use it however much you want but only on one device. It also allows only one simultaneous connection. But considering that you’re getting a VPN with unlimited data usage for free, it’s still a pretty good deal. Hotspot Shield has pretty good speeds, peaking at around 230Mbps. It allows you to choose from a large number of servers as well.

Follow @carinefebre
OfferDownload Removal Toolto scan for Best Free VPNs to use in 2023If you have been infected with Best Free VPNs to use in 2023, you need to get rid of it as soon as possible. For faster removal, use anti-malware software.
More information about WiperSoft and Uninstall Instructions. Please review WiperSoft EULA and Privacy Policy.