Send encrypted emails and messages, store encrypted files on your computer, transfer encrypted files to other users, or keep your encrypted files in the cloud. All of this is possible with Cypherdog. Cypherdog has your complete privacy in mind, allowing you to communicate privately, as well as store, transfer, and receive files without the possibility of them being viewed by an unauthorized party. 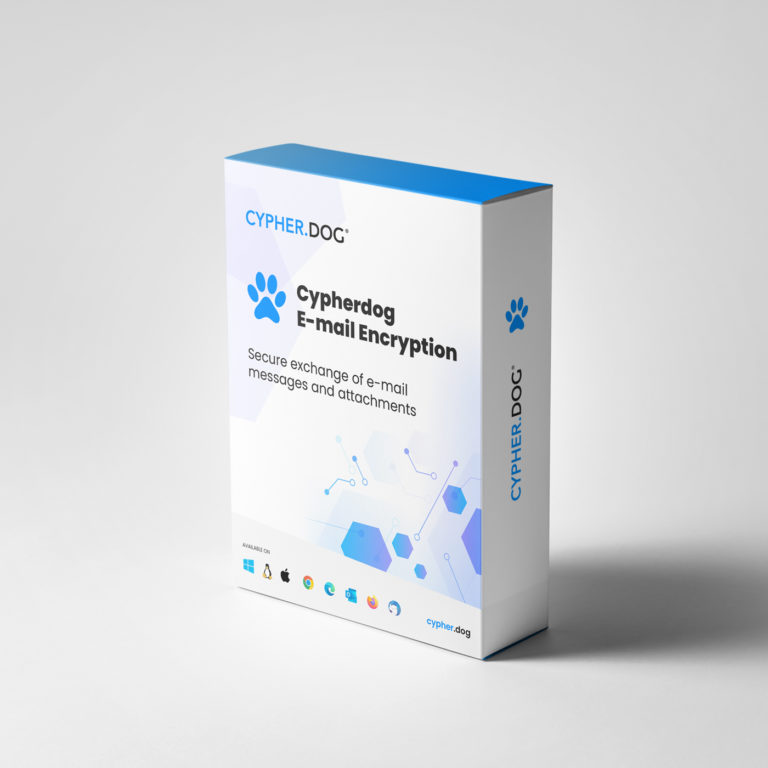 Cypherdog has no interest in your information and does not collect your IP address, location, logs, mobile phone number, address book, etc. It also does not have access to your private keys used for encryption/decryption of communication and files, nor can it see your stored or transferred files.

Cypherdog is compatible with all modern operating systems, including Windows, macOS, and Linux. It can also be added to Google Chrome, Mozilla Firefox, and Microsoft Edge browsers. All of its features are also very easy to use, which makes Cypherdog suitable for all users, regardless of their skill levels.

Cypherdog’s File Exchange & Storage feature both keeps your files safe and allows you to send them privately without the risk of them being accessed by anyone other than the intended recipient(s). You can transfer files of any size to any other person who uses Cypherdog. The files being transferred are encrypted, and only the intended recipient will be able to decrypt and view them. This feature also allows you to store encrypted files in a dedicated folder (aka a safe), preventing someone with access to your device from being able to open them. It should be mentioned that Cypherdog has no access to stored and transferred files, so they are completely protected from third parties.

As long as you keep your private key confidential, your data will not be at risk. The key is generated by Cypherdog using algorithms and is encrypted with your password. Furthermore, the key never leaves your device. You can back up the private key to a removable storage device or print it out in case you lose it. If the key is lost, there is no way to recover it because Cypherdog does not have access to it.

Cypherdog’s File Exchange & Storage feature is very easy to use. Once you’ve set up your account, you can transfer files to other Cypherdog users with a few clicks. You will also be able to transfer files to the cloud using drag & drop. The program does everything else, including encrypting and decrypting the files.

Our email accounts hold ridiculous amounts of information about us and it’s one of the most widely used communication services. Oftentimes, when we send private information via email, we don’t consider the fact that if someone gained access to our or the recipient’s email accounts, they would gain access to that information. And even if we do our best to secure our accounts with strong passwords and two-factor authentication, there’s always a slim possibility that it will not be enough. If you regularly send private information via email or simply want to prevent third parties from being able to read the emails, Cypherdog offers an email encryption service.

Cypherdog email encryption service allows you to encrypt your emails so that only the recipient is able to open them. Not only does it allow you to encrypt text but also documents, text files, sheets, etc. Once you encrypt your email, only the intended recipient will be able to decrypt and read it. Cypherdog email encryption also allows recipients to confirm the senders’ identities.

The cryptographic keys used to encrypt and decrypt emails do not leave your computer. But if they are ever lost for whatever reason, they can be retrieved from your USB backup if you make it.

Cypherdog’s Messenger app is for those who wish for their private communications to remain private. It’s a completely private messaging service that encrypts all messages and deletes them after 24 hours. Among its features is also an identity confirmation service that allows you to confirm the identity of other users during a face-to-face meeting. Cypherdog does not keep track of whom you’re contacting, nor does it have access to your messages or your address book.

Cypherdog Messenger was developed with simplicity in mind. The interface is easy to navigate, and the setup is also not overly complicated. This makes the Messenger app accessible to users with all levels of skill. Once the app is installed on your device, all you need to do is create an address book of other users who use Cypherdog Messenger and start messaging.

All in all, Cypherdog protects you against the following:

Scan QR code and get the NEVADA Ransomware removal instructions on your mobile.

The QR code is displayed on our webpage because sometimes it may be difficult to terminate such unwanted programs as NEVADA Ransomware. You can scan the QR code using your mobile phone and get manual removal instructions that will help you remove NEVADA Ransomware from your device.

OfferDownload Removal Toolto scan for CypherdogIf you have been infected with Cypherdog, you need to get rid of it as soon as possible. For faster removal, use anti-malware software.
More information about SpyWarrior and Uninstall Instructions. Please review SpyWarrior EULA and Privacy Policy.