Facebook voice message virus refers to a virus distributed via Facebook voice messages. It belongs to a family of Facebook viruses that use hijacked Facebook profiles to trick users into clicking on messages which trigger malware downloads. Those messages are usually pretty obvious but many users do not pay attention to the signs and click on them without double checking. What specific malware users end up installing when they click on the malicious link is difficult to determine because there are many different ones, but it’s likely some kind of potentially unwanted program (PUP) or a trojan. The latter are rather serious infection that can result in stolen personal information and files, as well as additional malware installed. 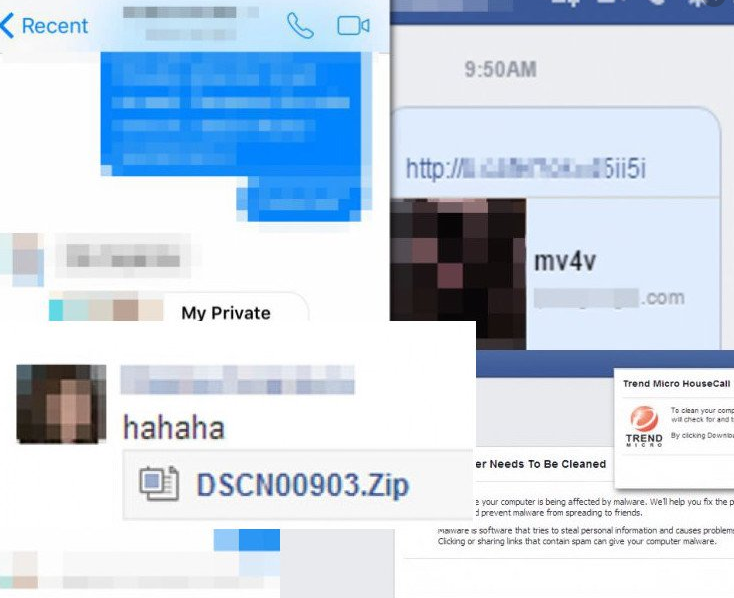 When users click on these malicious Facebook messages, their profiles may be taken over as well, and they would send the same message to their contacts, spreading the virus further. We will explain the signs of these messages later on in this report.

If users have clicked on the malicious message and infected their computers with something, it’s recommended to use anti-virus software to delete Facebook voice message virus. Changing their Facebook account’s password is also a good idea.

The majority of these Facebook viruses are spread via Facebook messages and posts. Users receive a message, usually from their contact whose profiles has been hijacked, with a photo, video, or in this case a voice message. Some messages are accompanied with a text like “Is this you”, “It’s a video of you”, while others are not. The malicious voice message usually does not come with a text, which makes it difficult for users to tell whether it’s legitimate. Many users use voice messages to chat so receiving one would not cause suspicion.

These malicious messages are sent from real profiles which have been hijacked for the purpose of spreading these viruses. If users click on the malicious message, their profiles are usually hijacked as well and they then spread the virus to their contacts.

These virus-harbouring messages can also come in group chats and in posts. Users may get a group chat request with tens of other people and receive the voice message or a link. Users may also be tagged in posts that promote these links.

In general, it’s recommended to avoid clicking on unsolicited links, videos, photos, voice messages, even if they come from known contacts. It’s better to check that the message is safe first rather than be sorry later.

If users click on the malicious Facebook voice message, they would be taken to a website that would initiate a malicious download. Or the site may trick users into downloading something. A known technique is showing a message to users saying that they need to install a plug-in or a program in order to view the video, contents of the site or listen to the voice message. What users would end up downloading is not a plug-in but rather malware.

One of the more dangerous computer infections users can get from these malicious Facebook messages is a trojan. Trojans are serious malware that have a variety of different functions. Some can steal sensitive information and personal files, others can steal passwords and work as a keylogger. Some trojans can also work as a backdoor for other malware to enter. These infections can be quite inconspicuous, so noticing them without anti-spyware software may be difficult.

Potentially unwanted programs are also distributed via these malicious messages. PUPs are not as serious, and are usually considered to be non-malicious. They generally focus on changing browser settings (homepage, new tab and search engine), redirecting to certain websites, showing ads and trying to convince users to purchase questionable programs. They are pretty annoying but highly noticeable, which allows users to quickly get rid of them.

If users receive a malicious Facebook voice message, it’s best to just warn the sender that their profile has been hijacked and ignore the message. However, if users have pressed on the message and it launched a download of something, it’s necessary to scan the computer with reliable anti-virus software. It’s difficult to determine, let alone delete Facebook voice message virus manually, so we do not recommend it.

Download Removal Toolto scan for FacebookUse our recommended removal tool to scan for Facebook. Trial version of WiperSoft provides detection of computer threats like Facebook and assists in its removal for FREE. You can delete detected registry entries, files and processes yourself or purchase a full version.

Scan QR code and get the s3arch.page removal instructions on your mobile.

The QR code is displayed on our webpage because sometimes it may be difficult to terminate such unwanted programs as s3arch.page. You can scan the QR code using your mobile phone and get manual removal instructions that will help you remove s3arch.page from your device.

Follow @GerrySeeger
OfferDownload Removal Toolto scan for FacebookIf you have been infected with Facebook, you need to get rid of it as soon as possible. For faster removal, use anti-malware software.
More information about WiperSoft and Uninstall Instructions. Please review WiperSoft EULA and Privacy Policy.