Are the pop-ups you are seeing legitimate?

Microsoft Help Desk Tech support scam is a rather elaborate scam that shows the so-called blue screen of death and asks that users call the provided number in order to solve the described issue. This is a more advanced version of the typical tech-support scam, which usually shows pop-ups while users are browsing. However, this one freezes the computer screen and shows a quite convincing blue screen that claims some kind of problem has been detected and Windows have been shut down to prevent damage to the computer. 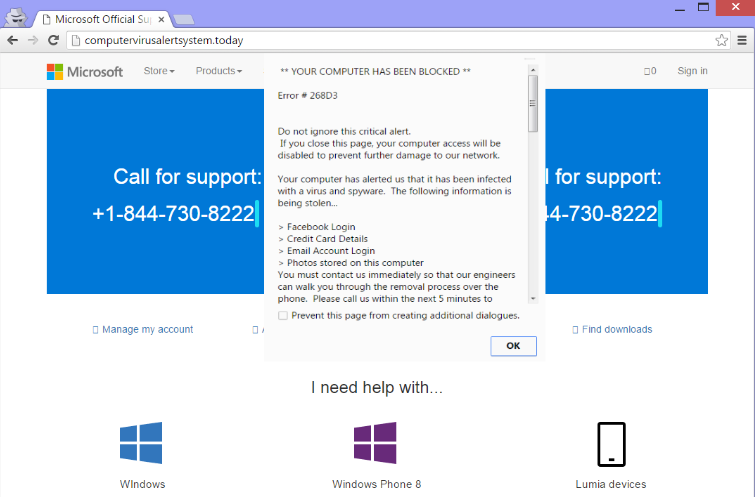 And no matter how many times the user restarts the computer, the same screen will continue to appear. Because of this, this scam has a higher chance of convincing people it’s legitimate, which will lead to crooks getting more money. This fake blue screen is caused by a Trojan, which could have infected your computer via spam email or malicious downloads.

Tech-support scams are aiming to get money by convincing people that their computer’s have encountered problems, whether it’s malware-related or not. They show pop-ups, or freeze the screen as is the case with this scam, and provide a tech-support number which will supposedly connect to professional Microsoft technicians. However, in reality, the user would be connected to scammers who would then pretend to fix the computer and demand money for the service. There is no need to call anyone, as the only thing wrong with your computer is the Trojan causing the blue screen to appear. So your next course of action should be to delete Microsoft Help Desk Tech support scam causing Trojan.

How did you get the malware

Spam email is very commonly used to spread Trojans, even with the raising awareness of dangerous emails. Spam emails are also becoming more sophisticated, which leads to many more people falling for them. An attachment would be added to the email, and the receiver would be asked to open it. Commonly, spam emails use well-known company names so that users lower their guard and become more trusting. For example, a user might receive an email from someone claiming to be Amazon. The receiver is informed that suspicious activity has been noticed on his/her account, or that a receipt for a purchase has been added to the email. The user, not noticing anything suspicious, opens the attached file and ends up infecting his/her computer. Generally, spam emails can be differentiated from legitimate ones, you just need to know what to look for.

First of all, look for grammar mistakes. No well-known company will have mistakes in the emails they sent, thus a lot of mistakes may be an indication of spam. Check how you are addressed, as spam emails will refer to you in a generic way, such as User, Member, Customer, etc. Legitimate emails by companies/people with whom you’ve had business before, or whose customer you are, would use your name. Also check the sender’s email and make sure it’s legitimate.

Even if everything checks out, we still recommend you scan the attachment with a malware scanner before you open it. This way you can be sure that what you are about to open is not malware.

Another way you could have gotten the Trojan is by downloading something from an unreliable source. It’s recommended to stay away from sites distributing pirated content, and sources known to host infected files.

More information about the scam

When the computer is infected with this particular Trojan, it will freeze your screen and launch a blue screen that claims your computer has encountered a problem. It might provide detailed information about the issue, which goes further to convince the user that the error is legitimate.

If not for the phone number provided on the screen, this could confuse even the more tech-savvy people. However, a tech-support number provided in an error message is a dead giveaway that what you are dealing with is a scam. Microsoft, or any other legitimate company, will never ask you to call them in such a way.

“Microsoft will never proactively reach out to you to provide unsolicited PC or technical support. If you receive a phone call claiming to be from Microsoft, or see a pop-up window on your PC with a fake warning message and a phone number to call and get your “issue” fixed, it’s better to be safe and not click any links or provide any personal information. If you feel like you’ve been the target of a technical support scam, you can help Microsoft stop cybercriminals by reporting it,” Microsoft clearly state on their official website.

Scan QR code and get the Mullvad removal instructions on your mobile.

The QR code is displayed on our webpage because sometimes it may be difficult to terminate such unwanted programs as Mullvad. You can scan the QR code using your mobile phone and get manual removal instructions that will help you remove Mullvad from your device.