SAntivirus (or Segurazo anti-virus) is a rogue anti-virus program that may show fake scan results in order to pressure users into purchasing the full version of the program. This and the fact that it may use the bundling method to install is the reason why SAntivirus is classified as a potentially unwanted program (PUP). It should be mentioned that it’s not a dangerous program, nor should it harm the computer. However, it’s nothing particularly useful either. 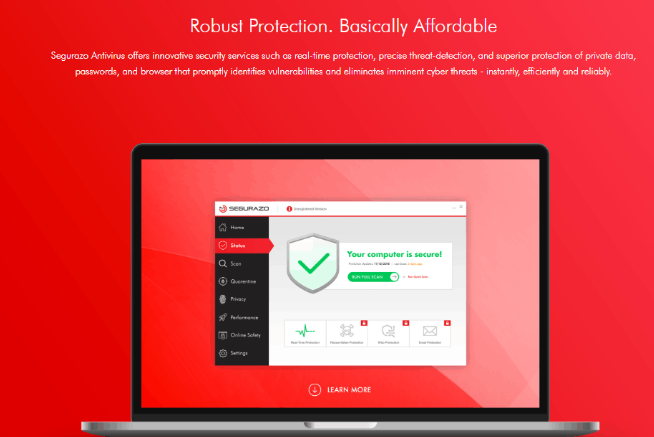 It’s supposed to work as an anti-virus program and claims to have real-time protection. However, it only allows to scan for free. There isn’t anything inherently wrong with requesting users first pay for a program before using it, but PUPs often use scare tactics to pressure users into making the purchase. These tactics include showing fake scan results.

Another issue with SAntivirus is that users may not necessarily install it knowingly. PUPs often use software bundling to install, as this method allows them to install unnoticed to users, without requiring their permission. Because it’s quite sneaky and users are essentially tricked into allowing these installations, programs using it as usually classified as PUPs. Fortunately, as long as users know how, they can easily prevent these unwanted installations. And if that is how the program installed, it’s strongly recommended to delete SAntivirus.

PUPs use software bundling to install

As already mentioned above, unwanted programs like adware, browser hijackers and potentially unwanted programs (PUPs) use software bundling to install. In short, these unwanted programs can come attached to free software as extra offers which are set to install alongside without requiring any explicit permission from users. So if users don’t pay attention to how they install freeware, they end up not noticing the offers, which is why they’re able to install. The offers are optional but they are hidden from users initially.

But it’s not difficult to prevent these unwanted installations, if users are paying attention. When installing freeware, it’s very important to opt for Advanced (Custom) settings instead of Default. Advanced settings will make all added offers visible, and users will be able to deselect all of them.

Since the majority of free programs will come with these offers, it’s very important to always check whether a free program that’s being installed has anything added to it. While some of the offers may seem useful at first, allowing them to install is not recommended. It’s much easier to uncheck a couple of boxes than it is to later have to uninstall pesky programs.

SAntivirus is supposedly an anti-virus program that has virus detection and removal features, as well as real-time protection. However, in reality the program will show fake scan result. The free version of the program will only allow users to scan the computer. Once the scan is complete, users will be shown results that claim threats have been found on the computer. A large number may be shown in order to scare the user.

If the user tries to remove the identified threats with the program, he/she will be asked to purchase the full program. As we said, loads of programs may first ask that users pay before using the full features, but programs like SAntivirus show fake results to pressure users. Users should be very skeptical of the results and check them carefully. What exactly is detected, what kind of issue is it, does it actually exist, etc.

Trusting SAntivirus completely is not exactly recommended. It’s a good idea to scan the computer with an additional program in order check whether anything is actually inhabiting the computer.

Anti-virus programs that detect and uninstall SAntivirus are:

Download Removal Toolto scan for SAntivirusUse our recommended removal tool to scan for SAntivirus. Trial version of WiperSoft provides detection of computer threats like SAntivirus and assists in its removal for FREE. You can delete detected registry entries, files and processes yourself or purchase a full version.

Scan QR code and get the Dosearch Lite Virus removal instructions on your mobile.

The QR code is displayed on our webpage because sometimes it may be difficult to terminate such unwanted programs as Dosearch Lite Virus. You can scan the QR code using your mobile phone and get manual removal instructions that will help you remove Dosearch Lite Virus from your device.

Follow @carinefebre
OfferDownload Removal Toolto scan for SAntivirusIf you have been infected with SAntivirus, you need to get rid of it as soon as possible. For faster removal, use anti-malware software.
More information about WiperSoft and Uninstall Instructions. Please review WiperSoft EULA and Privacy Policy.