The Best VPN Services for 2023

A VPN (Virtual Private Network) is a program that makes your browsing private by encrypting all your online activities. It not only makes you anonymous when online and protects your privacy but also allows you to access geo-blocked content. It’s a very useful tool to have, whether you’re trying to access Netflix’s US library from another country or trying to protect your privacy. VPNs also allow you to use public Wi-Fi safely without worrying about prying eyes. 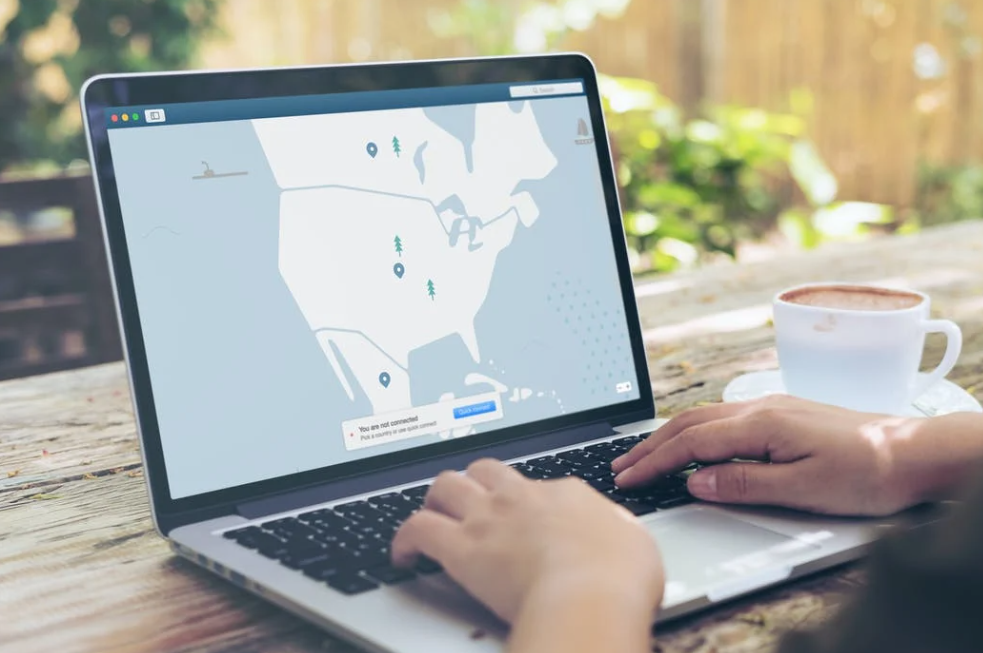 If you’ve decided that, for one reason or another, you need a VPN, your next step is choosing the one that best suits your needs. Taking the time to research VPNs before making a decision is very important because there are many options. There are also plenty of deceptive VPNs that collect and sell data instead of making users’ browsing private. Free VPNs are particularly guilty of this. In many cases, free VPNs are free precisely because they make money off selling users’ data.

When choosing a VPN, it’s important to consider not only the price but also features, privacy, and even company history. To help make the decision easier, we have provided a list of the best VPNs to use in 2023 with brief overviews of features, interface, and price.

Developed by cybersecurity software company Nord Security, NordVPN is one of the best VPNs for a reason.

Features. NordVPN allows users to choose from 5,525 servers in 59 countries. Its no-logs policy ensures your privacy is completely protected when browsing, and its great speeds make browsing a very smooth experience. It’s one of the fastest VPNs available so you should not notice any internet speed problems. It’s also one of the few VPNs that still unblock streaming services like Netflix and Disney+. A subscription allows up to 6 connections and setting up NordVPN on a router counts as only 1 connection. In addition to the VPN, NordVPN also offers a malware protection feature that warns you when you’re on an unsafe site, as well as scans files and attachments for malware. A tracker/ad blocker feature is also included, and it’s a great adblocker that takes care of all intrusive ads/pop-ups/redirects. Depending on the subscription plan, NordVPN also offers a password manager, a data breach scanner, and 1TB of cloud storage.

Interface. NordVPN is very user-friendly and easy to use, which is one of the reasons why it’s widely accepted that NordVPN is one of the best. Setting it up and connecting to servers is extremely simple, so even novice users should have very little trouble with it. 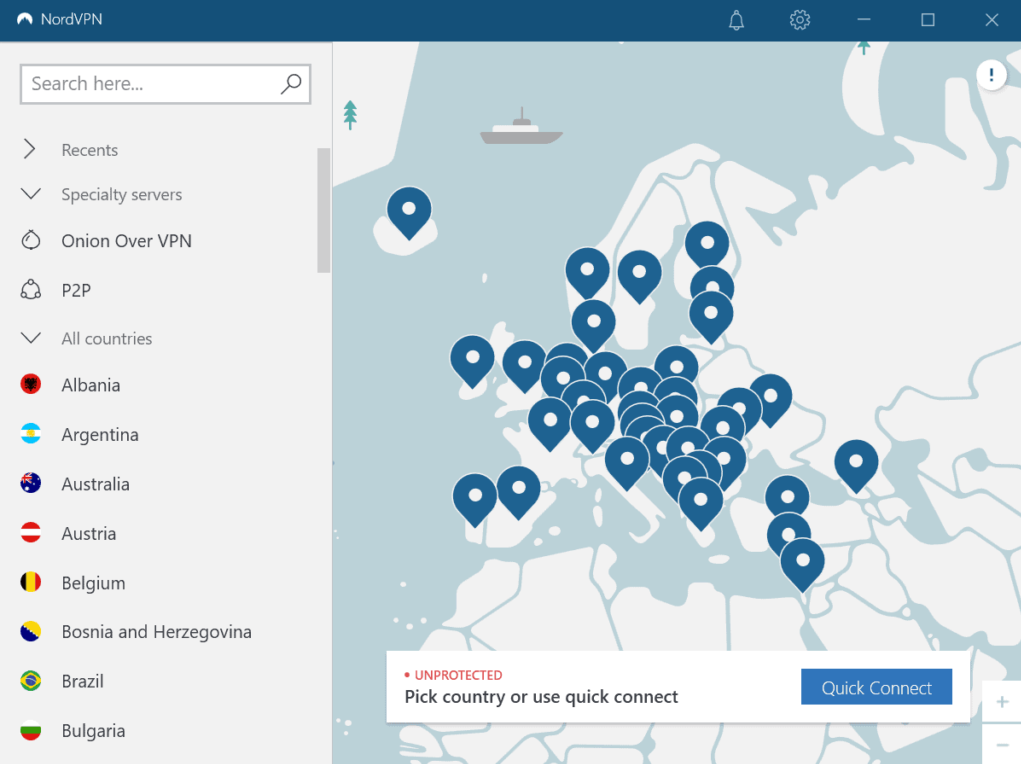 There is no free trial but technically, the 30-day money-back guarantee counts as a free trial. If you’re not satisfied with the program, you can get your money back provided you do it within the first 30 days. 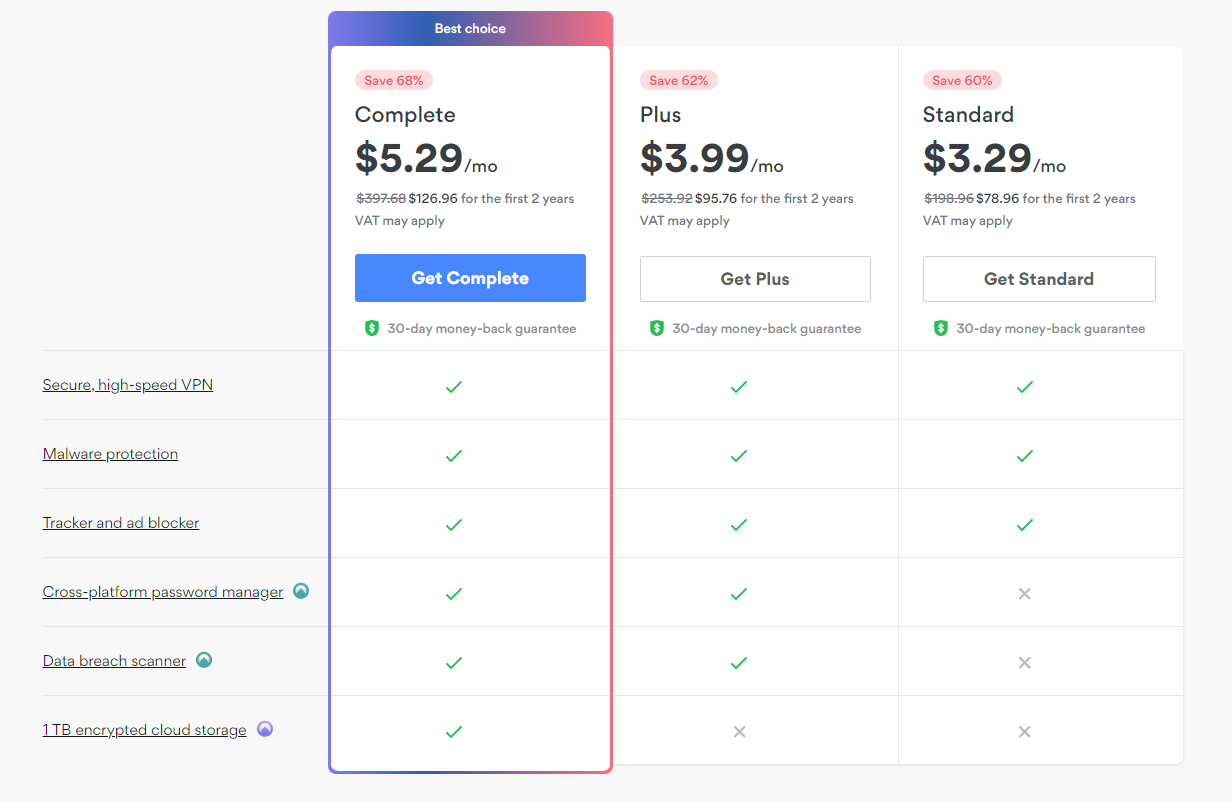 Features. ExpressVPN offers users connections to over 3,000 servers in 94 countries. It has a strict no logs policy so none of your browsing data will be collected. It has strong encryption, a kill switch, and a clear privacy policy, making ExpressVPN a great VPN choice overall. ExpressVPN is also exceptionally fast so you will not sacrifice internet speed when using it. ExpressVPN also unlocks streaming services. Not all servers work but it’s not difficult to find one that would allow access to geo-blocked Netflix, Disney+, Amazon Prime Videos, etc.

Interface. It’s obvious that ExpressVPN developers took users into consideration when designing the program. Using ExpressVPN is a very smooth experience. Setting up the VPN is very easy and straightforward, as is connecting to servers. ExpressVPN’s user-friendly interface is one of the reasons why it’s such a great VPN. 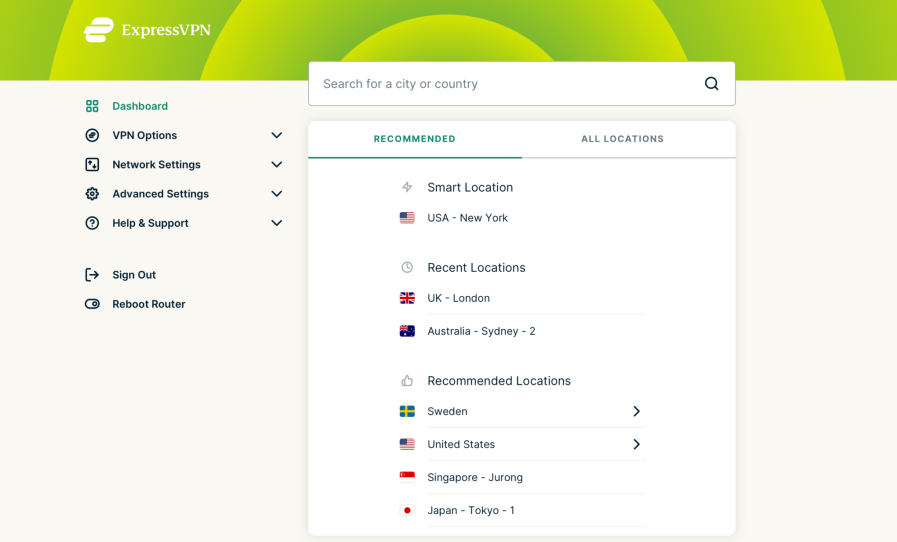 Features. Surfshark users can connect to over 3,000 servers in 100+ locations (65+ countries). It has strong encryption, a kill switch, a private DNS, and more. One of the best things about Surfshark is that it offers unlimited simultaneous connections, meaning you can use it on as many devices as you want. Surfshark’s speeds have improved quite significantly over the last couple of years, so you should not notice any internet speed issues. Surfshark is also great at unblocking geo-blocked content, including streaming services like Netflix, Amazon Prime Video, Disney+, and BBC iPlayer.

Interface. Surfshark has quite a few features so the interface may initially appear more complicated. However, once you get the hang of it, it’s very easy to use. For users who may have trouble, there are detailed guides provided on the official website. 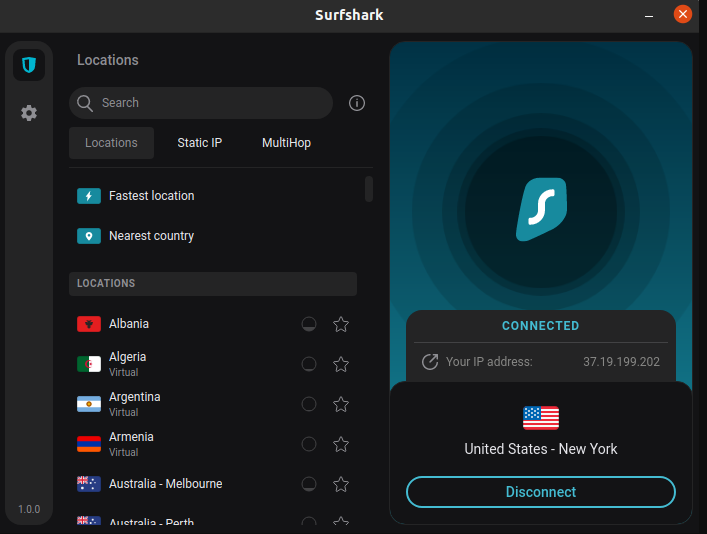 Price. Surfshark VPN is one of the cheaper VPNs available, provided you’re willing to subscribe more long-term. The monthly plan is $12.95/month, which is quite expensive, but the other two plans are very cheap. The 12-month plan is currently $47.88/year ($3.99/month) with a 69% discount, while the 24-month plan is currently $59.76/two years ($2.49/month) with an 81% discount. There is a 7-day free trial for Android, iOS, and macOS users, as well as a 30-day money-back guarantee for all platform users.

Owned by Kape Technologies, Cyberghost is a great VPN, particularly for users who need many locations.

Features. Cyberghost allows users to connect to more than 9,000 servers in 90+ countries. It uses powerful encryption to make sure your data is protected and has a strict no-logs policy. Cyberghost is also customizable and allows you to set up automatic connections to certain servers when you open a particular app. For example, if you open Netflix, you can set it up to connect to a US server to immediately access its US library content. Cyberghost has great speeds so your browsing experience will not suffer when using it. Cyberghost also unlocks most streaming services like Netflix, Amazon Prime Video, and Disney+.

Interface. Cyberghost is fairly easy to use and has a nice design. It’s not difficult to set up but if you have trouble, you can find detailed instructions and guides to help you. 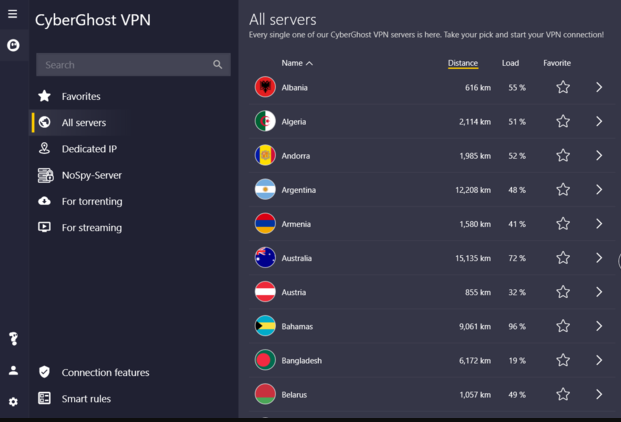 Price. Cyberghost has 4 subscription plans, though they only differ in length. The monthly plan is $12.99/month, with you being billed every month. If you’re willing to pay a bigger sum upfront, it’s ultimately cheaper to buy the 1-year, 2-year, or 3-year plans. The 1-year plan costs $51.48/year ($4.29/month), while the 2-year plan is $78/two years ($3.25). The 3-year plan currently has an 82% discount and offers an additional 3 months. So for 3 years and 3 months, you’d need to pay $89.31. Cyberghost also has a 45-day money-back guarantee in case you’re not satisfied with the VPN. A free trial is also available.

Developed by Proton AG, ProtonVPN is another great VPN to add to the list of best VPN services to use in 2023.

Features. ProtonVPN has over 1,700+ servers in 60+ countries, impressively high speeds, a kill switch, and a strict no-logs policy. ProtonVPN is open-source and is routinely audited, ensuring high-security standards and complete transparency. ProtonVPN has impressive speeds as well, so browsing quality does not suffer when connected to it. It also unblocks streaming services like Netflix, Amazon Prime Video, and Disney+.

Interface. ProtonVPN has an exceptionally nice design. The dark design looks modern and is very eye-pleasing. The interface is very user-friendly with a map of available servers and locations. It’s easy to set up and use so even users with little computer skills should have no issues with it. 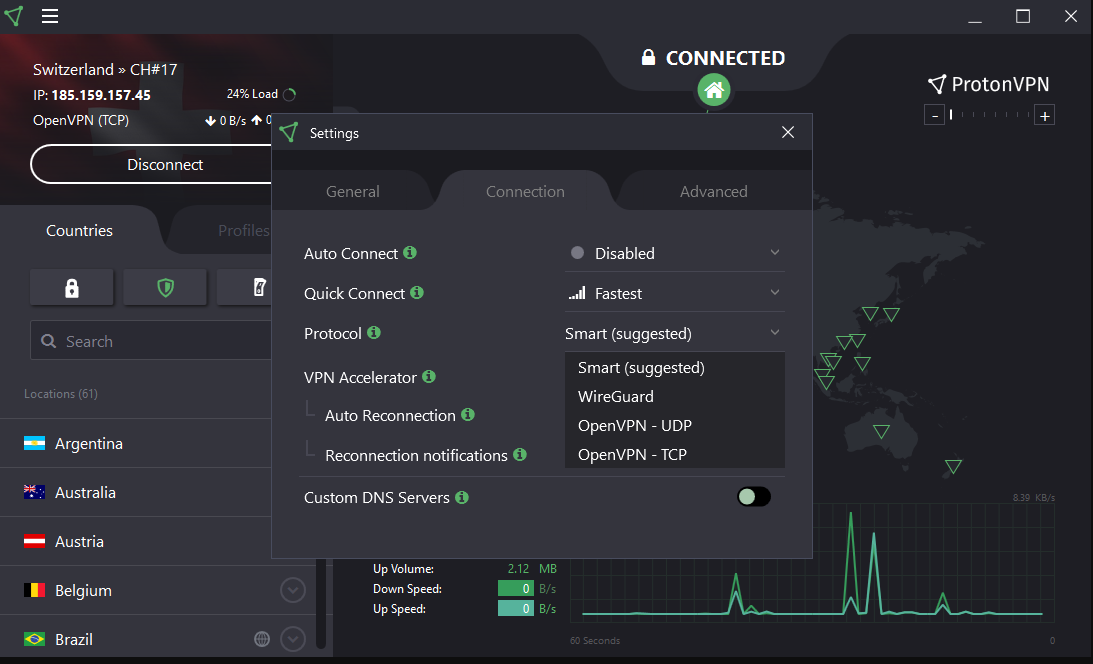 Price. ProtonVPN offers three plans that have the same features but differ in length. The monthly plan is $9.99/month, which is cheaper than what other VPN providers offer. The 1-year plan currently has a 40% discount and costs $71.88/year ($5.99/month), while the 2-year plan costs $119.76/two years ($4.99/month). The discounts seem to only be applicable when making the initial purchase so the prices go up significantly when subscriptions renew.

ProtonVPN is one of the few VPN providers to offer a free version, albeit a limited one. Users using the free version can connect one device to more than 100 servers in 3 countries (US, Netherlands, and Japan). The free version offers medium speed and has a strict no-logs policy. The fact that ProtonVPN does not log users’ activity when using the free version is commendable because many free VPNs do collect data and sell it. A 7-day trial is also available, as is a 30-day money-back guarantee. 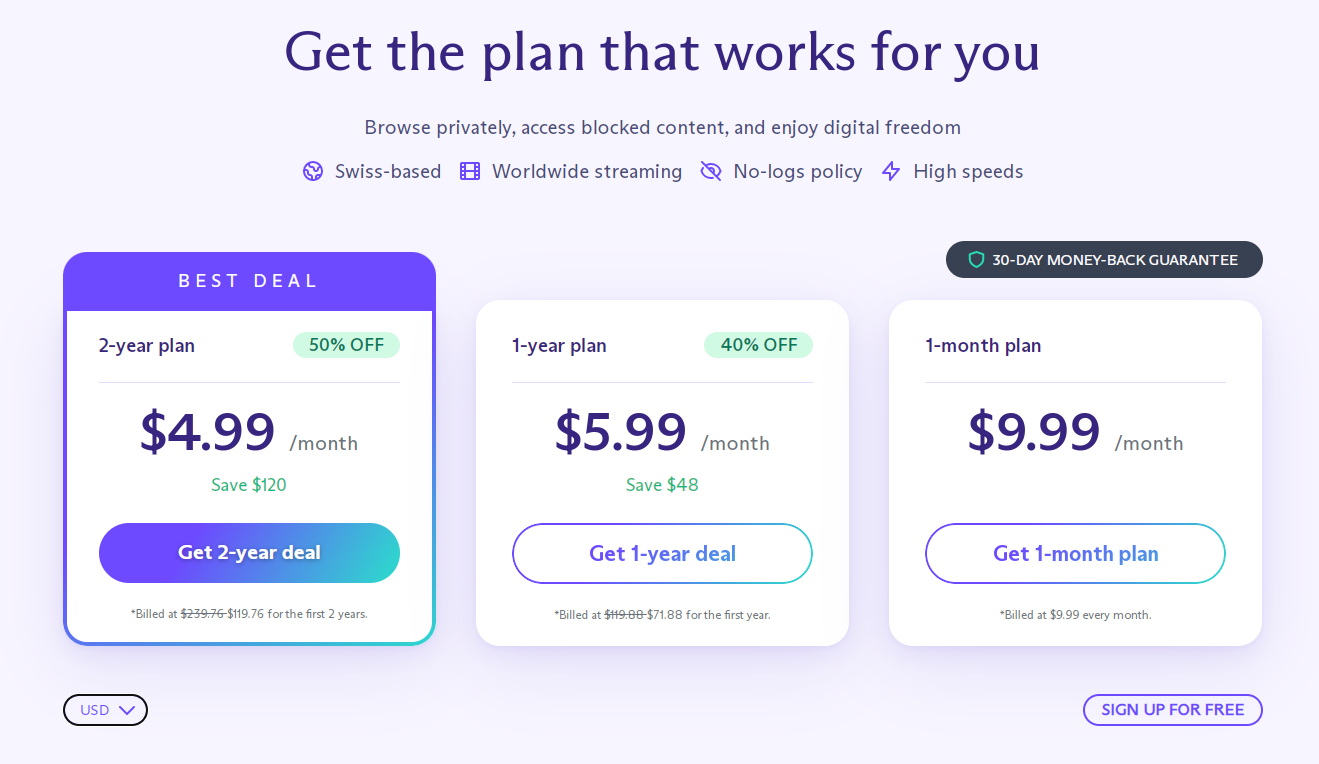 Scan QR code and get the Wizard Ransomware removal instructions on your mobile.

The QR code is displayed on our webpage because sometimes it may be difficult to terminate such unwanted programs as Wizard Ransomware. You can scan the QR code using your mobile phone and get manual removal instructions that will help you remove Wizard Ransomware from your device.

Follow @carinefebre
OfferDownload Removal Toolto scan for The Best VPN Services for 2023If you have been infected with The Best VPN Services for 2023, you need to get rid of it as soon as possible. For faster removal, use anti-malware software.
More information about WiperSoft and Uninstall Instructions. Please review WiperSoft EULA and Privacy Policy.