Escobar Malware (Android) – How to remove

What is Escobar Malware (Android)?

Last year’s newcomer Aberebot Android malware has been rebranded into “Escobar”, the same old banking trojan but with new features. Judging from the author’s posts on hacker forums, this Android malware is still in the testing phase but it will likely start affecting users in the near future. The updated malware comes with quite alarming features, such as the ability to steal one-time codes from Google Authenticator, an app used by many users to add an extra layer of security to their accounts. 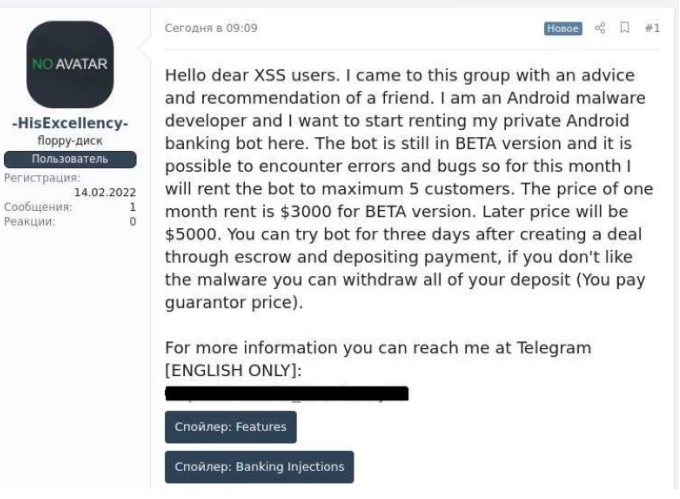 Escobar malware’s initial version first appeared mid-2021 and in February 2022, a post on a Russian-speaking forum appeared inviting cybercriminals to use a BETA version of Escobar. The author is offering Escobar malware as malware-as-a-service (MaaS) which essentially allows cybercriminals who have very little skill to carry out malicious attacks. According to the author’s post, the BETA version costs $3000/month but once the full version is released, the price will go up to $5000/month.

Escobar Malware is a banking trojan so its primary target is users’ banking information. When it’s initiated, the malware requests 25 permissions in total. Among its capabilities are: audio recording, reading SMS, reading/writing storage, making calls, tracking location, uninstalling apps, injecting URLs into web browsers, and using the phone’s camera. But most importantly, the malware essentially allows attackers to completely take over the phone. Granting all these permissions to the malware essentially means that it can do anything, including showing fake login pages to phish login credentials, as well stealing multi-factor authentication codes from SMS and/or apps like Google Authenticator.

Escobar Malware is yet to be fully released so it’s currently unclear how exactly it will be distributed. However, considering that the malware author is planning on renting it out, we can expect that there will be many distribution methods. There are reports, however, about the malware being disguised as a McAfee anti-virus app. The way this works is users may come across fake alerts about viruses on their Android device when browsing certain websites. These alerts use various scare tactics to intimidate users into downloading the offered apps. And users would give these apps all kinds of permissions because they know the names like McAfee and trust the apps. This just goes to show how important it is that users only download apps from legitimate sources like the Google Play Store. Google’s Play Store is strictly regulated, and while some malicious apps are able to bypass the security measures, it’s still much safer to download apps from it instead of unknown third-party app stores.

There are certain actions you can take to protect your Android device from Escobar Malware, as well as many other threats that can affect Androids.

As we’ve already said, legitimate app stores like Google’s Play Store have very strict security measures. So the chances of encountering malicious apps on Google Play are much lower than that of third-party app stores. However, it’s also important to keep in mind that those security measures are not absolute, and some malicious apps are able to bypass them. It has happened in the past, which is why it’s important that you always double-check everything before installing an app. Check the developer, reviews, permission requests, etc.

Phishing sites are often made to appear more or less identical to legitimate sites so it’s not surprising that a lot of users fall for it. However, no matter how legitimate a phishing site’s design may look, the URL will always give it away. So before you try to log in anywhere, always check that the URL is as it’s supposed to be.