What is Driver Restore

Driver Restore is driver updating program, classified as a potentially unwanted program (PUP) due to its behavior. The biggest issues with the program are its installation methods and potentially fake scan results. The internet is full of programs like Driver Restore that promise to speed up your computer by removing junk or in this case, by updating drivers. However, many of them are fake programs that essentially only want to trick you into purchasing the full version of the program. Such is the case with Driver Restore. 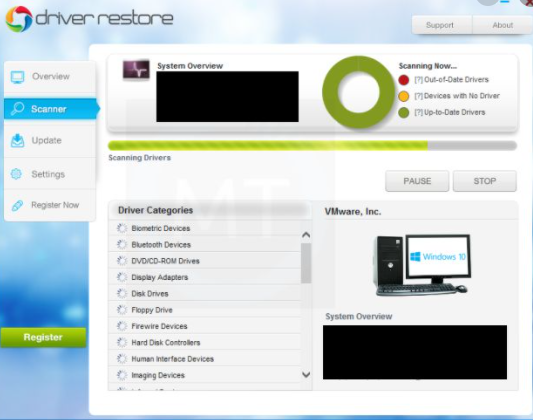 You may not even notice Driver Restore installing, as it could install via software bundling, meaning it could come attached to free software you install. This is called software bundling, and it’s a common installation method used by developers of potentially unwanted programs. It allows the PUPs to install alongside freeware without users even noticing. That’s likely how Driver Restore installed on your computer. If you are unaware, we will explain how you can prevent this from happening in the following section of the report.

Once it installs, Driver Restore will start showing intrusive notifications suggesting you urgently need to perform a scan of your computer to update your drivers. If you scan with the program Driver Restore, results will show that multiple drivers need to be updated. However, if you try to use the program to do that, you would be asked to first buy the full program. Doing that is not recommended because the program is likely showing fake or exaggerated results in order to pressure you into paying. Furthermore, there is no need to use a paid program to update your drivers, as you can do that manually yourself.

We strongly suggest you remove Driver Restore, especially if you do not recall installing the program itself. Its usefulness is debatable, and paying for something you can do yourself without any trouble would be a waste of money.

If you were looking for programs with the purpose of updating your drivers, it’s possible for you to have stumbled across Driver Restore. It’s offered on both third-party download sites and the official page, so it’s not difficult to download it. However, if you have purposely installed it, you should research programs before installing them in the future. A Google search of Driver Restore would have shown many results advising against using this program.

If you don’t remember installing it, it’s very much possible that it was attached to some free program you installed, hence why it was permitted to install alongside. As we mentioned above, this is called software bundling. Most free programs you download from third-party sources will have some kind of offer(s) attached, which is why it’s better to download from official sources. Nonetheless, it’s very important how you install free programs, if you want to prevent extra offers from installing alongside. The issue with those offers is that while they are optional, they’re initially hidden to prevent users from stopping their installation. And if they’re not manually deselected during installation, they’re permitted to install alongside the program.

When installing a free program opt for Advanced or Custom settings instead of Default. Default settings will hide all added offers and they’ll be permitted to install. However, Advanced will allow you to view everything that’s been attached, as well as permit you to deselect everything. All you need to do is uncheck the boxes.

Preventing these unwanted offers from installing takes mere seconds and very little effort, while uninstalling pesky programs can be quite troublesome. So to save you the time and trouble, always pay attention to how you install programs.

It should be mentioned that the program itself isn’t harmful in any way. It’s not a virus, hence why it’s not detected by all anti-virus programs. However, it’s not something that’s particularly useful to you either. It’s advertised as a driver updater, but it will not work unless you buy the full program.

As soon as it installs, Driver Restore will start showing notifications, pestering you to scan your computer for driver updates. The notifications can be quite annoying, especially if you were tricked into installing the program. If you do scan your computer, Driver Restore will claim that there are issues with multiple drivers. But before you can install those updates, you will be asked to purchase the full version of the program, which currently costs $29.95. The fact that it asks you to first pay for the program is not that unusual, but since Driver Restore is not a reliable program, paying for it is not recommended. Especially because you don’t need a special program to update your drivers.

System optimization tools are often the subjects of debates as many users do not believe them to be necessary. Today’s computers are fully capable of maintaining themselves, thus system optimizers may be a waste of money. But if you decide that you want a program to update your drivers, Driver Restore is not it.

If you have decided to delete Driver Restore, you can do it using anti-virus software. Not all security programs will detect and remove it, but if you use ESET, Malwarebytes, or Microsoft you should be able to remove Driver Restore no problem. You can try to uninstall Driver Restore manually, though that may be more difficult as PUPs are often rather persistent and difficult to get rid of. Instructions for manual Driver Restore removal will be provided below this report if you are unsure about where to begin.

It’s also worth mentioning that if you have purchased the program’s subscription plan, you will likely need to cancel it. Otherwise, you will be charged again once your plan expires. So to avoid unexpected expenses, cancel the plan immediately.

Follow @carinefebre
OfferDownload Removal Toolto scan for Driver RestoreIf you have been infected with Driver Restore, you need to get rid of it as soon as possible. For faster removal, use anti-malware software.
More information about WiperSoft and Uninstall Instructions. Please review WiperSoft EULA and Privacy Policy.