NTUSER.VBE is a worm, a malware program, that is detected by multiple anti-malware programs. Security software will detect it under different names, for example according to virustotal.com, Kaspersky detects it as Worm.VBS.Agent.fd, while McAfee as VBS/Autorun.worm.aaha. 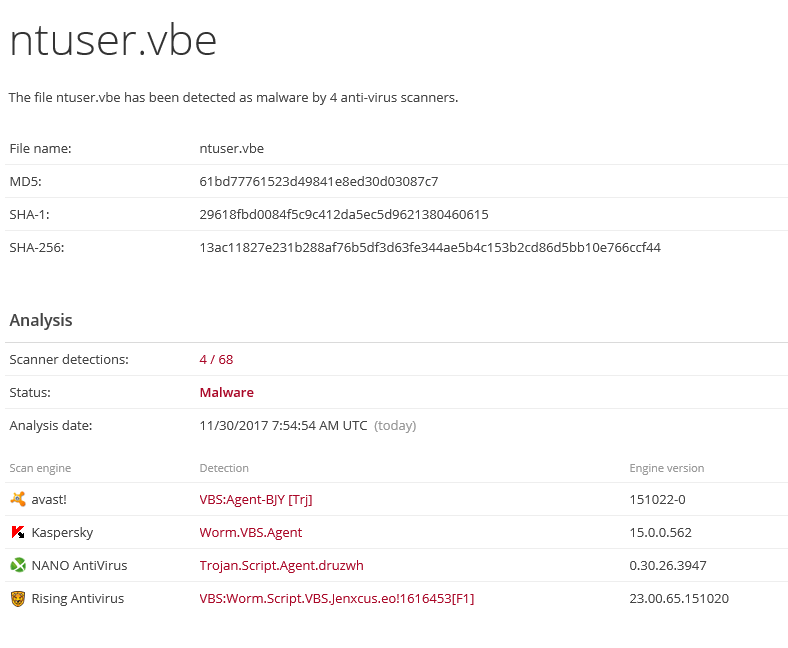 If you are not sure what a worm is, it’s a malicious computer programs that duplicates itself so it can spread to other computers. They can take advantage of computer network vulnerabilities and spread to the entire network. Usually, worms are made to spread but there are those that are designed to do more than that. They are referred to as a payload. Payloads can do a lot of harm, like delete files or create a backdoor. It’s doubtful you would have noticed the infection by yourself, so if your anti-malware is warning you about it, make sure you delete NTUSER.VBE.

What can be said about this infection?

It may be difficult to say how you could have gotten the infection because there are a couple of scenarios to consider. Worms can spread via network, so someone on your network might have been infected, it duplicated and entered your computer via network. You could have also gotten it by opening an infected email.

If the worm is designed to work as a backdoor, your computer could be infected with more malware. A backdoor is exactly what the name implies, it opens a door for malicious infections to enter your computer undetected. It could download the malware in the background, and you would have no idea. This could lead to very serious problems, like deleted or taken hostage files, or stolen personal data, like banking credentials. The worm might also download files that would prevent your anti-malware from working. So unless you notice your security program not functioning properly, you might have no idea that there is something going on.

Manual NTUSER.VBE removal is not possible for the regular user so attempting it is not recommended because you could end up doing more damage than good.  You will have to use anti-malware software. Scan your computer with a reputable program, and remove NTUSER.VBE as soon as it is detected.

Download Removal Toolto scan for NTUSER.VBEUse our recommended removal tool to scan for NTUSER.VBE. Trial version of WiperSoft provides detection of computer threats like NTUSER.VBE and assists in its removal for FREE. You can delete detected registry entries, files and processes yourself or purchase a full version.

Scan QR code and get the VPN removal instructions on your mobile.

The QR code is displayed on our webpage because sometimes it may be difficult to terminate such unwanted programs as VPN. You can scan the QR code using your mobile phone and get manual removal instructions that will help you remove VPN from your device.

Follow @GerrySeeger
OfferDownload Removal Toolto scan for NTUSER.VBEIf you have been infected with NTUSER.VBE, you need to get rid of it as soon as possible. For faster removal, use anti-malware software.
More information about WiperSoft and Uninstall Instructions. Please review WiperSoft EULA and Privacy Policy.