What is PC Gold Optimizer

PC Gold Optimizer is a questionable system optimization tool, classified as a potentially unwanted program (PUP). It’s advertised as a tool that can remove malware, fix security holes, take care of privacy, optimize a system, clean the registry and junk, and update drivers. It appears to have a lot of features, though it’s certainly not as useful as it may first appear. In fact, we suggest you be very skeptical of PC Gold Optimizer and the scan results it shows you, as they will likely be fake. Bogus system optimizers often show fake scan results in order to pressure users into buying full versions of programs, doing which is necessary to fix the supposed detected issues. In many cases, the results are greatly exaggerated or the issues are made up altogether. 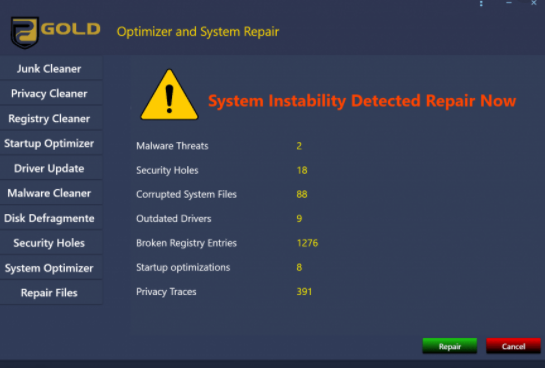 We don’t recommended purchasing the program, as even if the issues it detects were real, you would be able to fix them yourself manually. We also strongly discourage you from buying the program if you don’t remember installing it. Programs like PC Gold Optimizer often spread via freeware bundles, meaning they come attached to free programs as extra offers. If users fail to deselect them, they are permitted to install alongside the freeware automatically. If that’s how the program installed, you should delete PC Gold Optimizer.

To increase their download numbers, PUPs often use software bundling to spread. Software bundling is essentially adding additional offers to free software. Those offers are often adware, browser hijackers and potentially unwanted programs. They’re set to install alongside the program automatically, and are purposely hidden. Users who don’t pay enough attention to how they install programs will end up accidentally allowing them to install.

If you want to stop unwanted additional installations when installing free programs, you need to opt for Advanced (Custom) settings when given the option. Unlike Default, Advanced settings will make all offers visible, and you will be able to deselect all of them. While some of the offers may seem useful, installing them is not recommended. More than likely, they’ll turn out to be some kind of pest. And it’s much easier to uncheck a couple of boxes than it is to uninstall infections that don’t want to be uninstalled. If you allow these offers to install whenever you install freeware, your computer will quickly fill up with junk that’s difficult to get rid of.

Should you remove PC Gold Optimizer?

As soon as the program installs, it will insist that you scan your computer for malware, issues, junk, etc. The scan results will show a lot of issues, the number could be in the hundreds. We suggest you be skeptical of whatever the program has found because the issues are likely exaggerated or made up altogether. Loads of bogus system optimizers show fake scan results in order to pressure users into buying their full versions. The same is with PC Gold Optimizer. In order to remove the problems it has found on your computer, you would need to first buy the program. But since the issues are likely fake, that would be a waste of money.

System optimizers are often advertised as a magic cure for a slow computer but in reality, they have very little effect. Furthermore, the majority of the things they do you can do yourself. Overall, the effectiveness of a system optimizer is debatable. We should also mention that they can do harm. Many system optimizers, including PC Gold Optimizer have a registry cleaning feature. But messing with the registry could lead to serious issues. Old, unused entries in the registry have very little effect on your computer so cleaning them is not necessary. But system optimizers insist on deleting those old entries. An essential registry entry could be deleted in the process, and worst case scenario you’d need to reinstall your Windows. Even Microsoft warns against using registry cleaners.

You can try to uninstall PC Gold Optimizer manually. But by far the easiest way would be to use anti-virus software. Loads of programs like ESET (A Variant Of MSIL/WinzardSysRepair.A Pote), Malwarebytes (PUP.Optional.PCGold), Emsisoft (Application.Sobrab.BGY (B)), Symantec (PUA.Superfluss), and Microsoft (Misleading:Win32/Lodi) detect and remove PC Gold Optimizer.

Right-click in the lower left corner of the screen. Once Quick Access Menu shows up, select Control Panel choose Programs and Features and select to Uninstall a software.

Click Go button at the top left of the screen and select Applications. Select applications folder and look for PC Gold Optimizer or any other suspicious software. Now right click on every of such entries and select Move to Trash, then right click the Trash icon and select Empty Trash.

Scan QR code and get the “MS-Windows Support Alert” scam removal instructions on your mobile.

Follow @GerrySeeger
OfferDownload Removal Toolto scan for PC Gold OptimizerIf you have been infected with PC Gold Optimizer, you need to get rid of it as soon as possible. For faster removal, use anti-malware software.
More information about WiperSoft and Uninstall Instructions. Please review WiperSoft EULA and Privacy Policy.